Why is additional education needed in Ecuador? 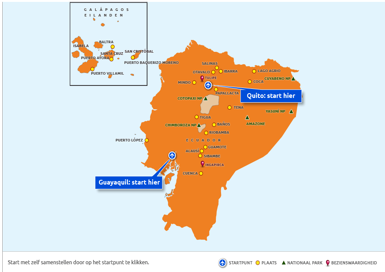 Our project location is Guamote. This is a small native village, high in the Andes. The village has around five thousand inhabitants, but around fifty thousand people live in the indigenous communities around Guamote. 95 percent of the population is native here (at country level this is 7%). This makes the Guamote region culturally the most authentic region of the country. But it is unfortunately also one of the least developed and poorest regions. 90% of the population gets their family income from small-scale agriculture, which is becoming increasingly difficult due to changing climate (drier every year), the altitude (3,100m and higher, with steep slopes) and the cold.

Political interest (from the capital) in the development of this area is very limited. Ecuadorian history also played an important role in the poor quality of local education. At the time of the Spanish conquest in the 16th century, the Indigenous people were made into slaves. It was not until the 1970s that reforms were implemented that put an end to the slave system. Little by little, the indigenous population gained more rights. But even today, there is still a lot of racism and they are being discriminated. The belief that they are dumber and less developed is unfortunately still a too widespread thought. The generation of children and young people who are currently attending school is the first generation to have the opportunity to receive primary and secondary education. The parents of these children have hardly had any education. Most grandparents are illiterate and hardly speak Spanish.

Study trajectories are outlined in Quito and especially designed to suit the urbanized mestizo (Spanish descent) population. Little attention is paid to the cultural identity and daily reality (children have to work hard in farming from childhood on) of the native school-going children. Additional education is needed to strengthen social organization, cultural identity (with attention to local Indigenous traditions and beliefs) and the specific talents of children from rural areas.

What do we wish to achieve?

We wish to teach children from Guamote and to give them a voice to express and realize their dreams. We want to show the children what options they have here if they believe in their own abilities. All too often the result of education is that children and young people move away from rural areas to try their luck in cities. By teaching children about their rights and responsibilities and the power of working together, we expect to strengthen their belief in their own abilities and possibilities. And, by teaching children to set up sustainable businesses, with an eye for their historical traditions and cultural individuality, they can take their future into their own hands.

In September 2019 we started the Aflatoun curriculum both in the center of our partner Inti Sisa in Guamote and in various indigenous communities. In the coming years we wish to extend the program so we can reach more children every time.

Our team in Ecuador

Our partner Inti Sisa is a foundation that has been strengthening local education in Guamote and the surrounding area for twenty years. They organize nursery education and adult education (sewing lessons, computer lessons, music lessons, etc.) and support various schools in the Andes. They have also been doing homework counseling for years at their own center in Guamote, and they organize a summer course every year. They finance this with income from their guesthouse. Our cooperation started in 2018 (after a visit by team member Eugenie Kortenhorst to Guamote). In the spring of 2019, three employees of Inti Sisa (Tamia, Laura and Eva) received their Aflatoun training in Quito.

Wish to know more? Contact the person in charge of our project in Ecuador: Eugenie Kortenhorst via eugenie@startup4kids.nl.